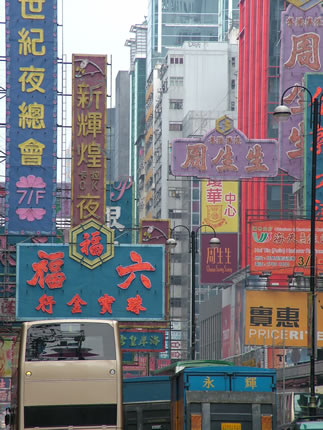 We could have done this trip the easy way and flown directly to Macau but it was $$$ so instead we took a cheap flight to Guangzhou, then a 3 hour coach to Macau. Before it got dark we had seen quite a bit of the Pearl River delta, had experienced traffic jams and near gridlock, and seen some lovely countryside.
In Macau it was like being back in Mediterranean Europe, it really didn't feel you were in Asia except that the bulk of the population was of Chinese descent and the signs were in dual language, both in Chinese and Portuguese.
Macau is very small so most of the tourist attractions were visited on foot which also allowed us to wander and get temporarily lost.
Hong Kong was a total contrast, Kowloon was very busy and noisy but the diverse markets were a joy. Hong Kong Island was much quieter and we did some wonderful walks with some breathtaking views.
Sanya was tropical beach, beach and more beach, long walks, visiting the nearby city and a few cocktails. 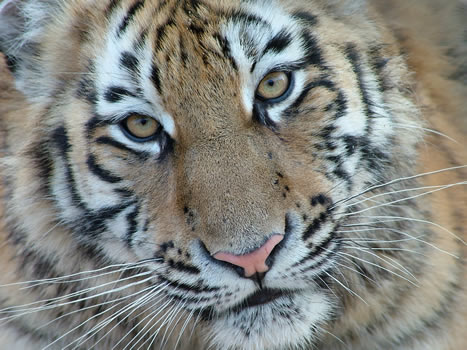 This big pussy cat lives in Harbin which is in northern China close to the Russian border. We decided to go to Harbin in February so that we could also visit the Ice and Snow Sculpture Festivals that occur there in January / February each year. Barbara hadn't yet experienced a China Railway Sleeper so we went on a 12 hour long train journey but we went 'soft class' instead of 'hard class' - extra comforts for the lady !
We arrived in Harbin at 7am and the temperature was -26°C, it was freezing, I have never felt so cold in all my life, any exposed flesh ached. It did warm up a bit during the day, it got to -22°C.
The Ice and Snow sculptures were incredible, Barbara loved the penguins. The Siberian Tigers (living) were wonderful and a privilege to see, they are such beautiful animals with, very sadly, such an uncertain future. 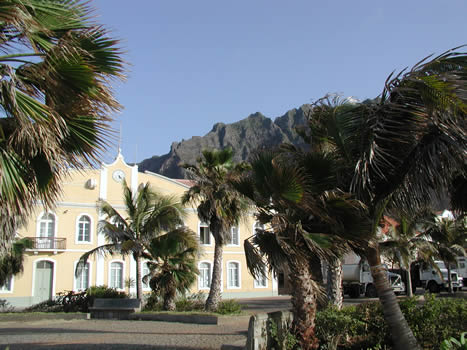 The Islands of Cape Verde are not a well known tourist spot. They are located in the Atlantic Ocean about 500 km west of Africa, off the coast of Mauritania and Senegal. It is an archipelago of volcanic origin, composed of 10 large islands and 3 smaller islands. The biggest of these islands is Santiago. Besides this island we visited Santo Antao, Sao Nicolau and Sal, the island where the airport is located. There was no time left for Fogo, the island with the highest volcano of the archipelago.
Cape Verde is a Democratic Republic getting its independence in 1975. Before this it had been a Portuguese colony. Therefore the official language is Portuguese. As in Macau Barbara did not have the opportunity to practice Spanish.
The majority of the population is very poor. The women make money selling fish or vegetables all the day. They balance it in a big bowl on their head.
The island of Santo Antao is traversed by an imposing mountain range. We did some marvelous walks, for example from the sea level to "Cova", an extinct volcanic crater.
Aalborg-Faroe-Shetland-Orkney-Inverness-Glasgow-Gothenburg-Aalborg in 14 days 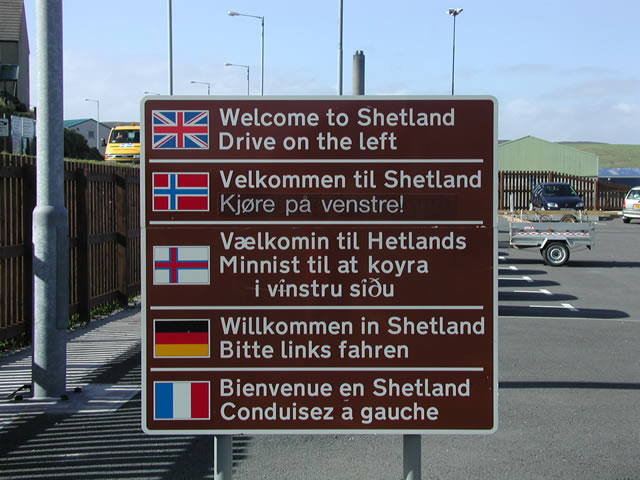 After 2 days of sailing in really good weather and with a brief stop on the Faroe Islands, I arrived in Shetland. An intensive 2 days of touring took me to Sumburgh Head Nature Reserve, Jarlshof Settlement, a Croft Museum and the town of Lerwick. Along the way I saw some beautiful scenery, fed some Shetland Ponies and stayed in the quaint Busta House Hotel. During Wednesday the wind reached Force 10 (allegedly) and I sailed to Orkney that evening - it was a 'roller coaster' of a crossing. During another 2 days of intensive touring I saw the Churchill Barriers, Scapa Flow, St Margarets Hope, Kirkwall, St Magnus Cathedral, Italian Chapel, Stromness, Skara Brae and the Ring of Brodgar. The two latter sights were granted World Heritage Status by UNESCO some years ago and it was a great experience to walk through house like buildings of our ancestors built 5000 years ago. Then another ferry took me to mainland Scotland passing the 'Old Man of Hoy' on the way. I walked the purple heather covered hills near Loch Ness - no appearance from Nessie, I climbed the mist enveloped Ben Lomond, I visited Stirling Castle and the nearby Wallace Monument (re the film Braveheart). Then it was the long journey home - walk, train, plane, bus, walk, ferry, walk, bus, walk - home to Aalborg. 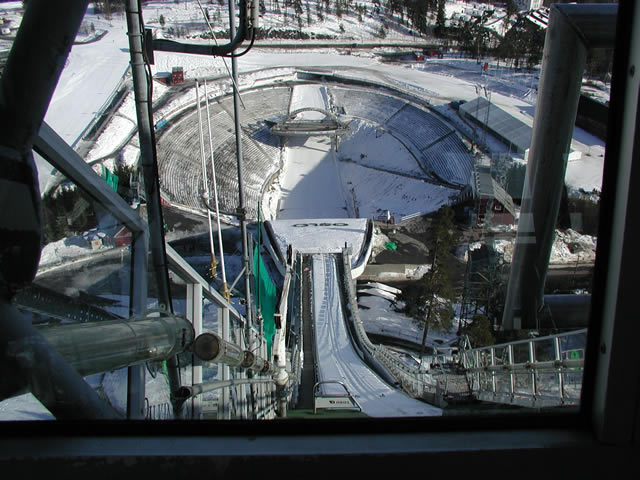 Who in their right mind would get out of a nice warm bed in the depths of winter, get the 07:43 train to Frederikshavn and take a 10½ hour long ferry ride to a very cold Oslo - I did!
So why Oslo - Barbara and anything Antarctic!
The last few hours of the ferry ride were lovely and scenic as I passed through the fjord leading to Oslo - lots of Alpine style scenes of trees, cabins and snow. It was well worth the 25 fare!
Oslo was enveloped in snow so getting around was a bit of a challenge but that contributed to the Antarctic feeling. The Antarctic experience was enhanced with a trip to the Fram Museum to see Amundsen's ship (designed by a Scotsman) that took him to the Antarctic on the first leg of his successful journey to the South Pole.
Then it was on to the Olympic Ski Jump at Holmenkolmen getting there by train which climbed steeply up the mountainside resulting in great views of the city. Being up close and personal to an Olympic Ski Jump is awesome and scary especially looking down the jump from the starting point at the top. Looking back up from the bottom is also weird.
So that was Oslo - oh, and I had one of the best curries ever! 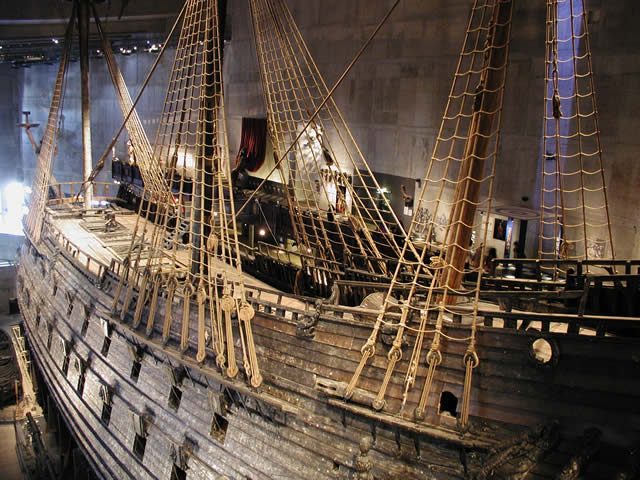 Up early, an early breakfast and an early train from Oslo to Stockholm  who needs beauty sleep!
The cross country train travelled through snow covered Norway and Sweden, the scenery en-route was beautiful.
After a quick check in at the hotel, it was time to visit the first coffee shop for hot chocolate, cake and cream! Then, with map and guide book, it was off to get lost. I walked to the palace and from there to an old square with a quaint coffee house which, with great difficulty, was resisted for 24 hours. This led into the old town, Gamla Stan, with its charming little streets, old houses and shops. From there I crossed the frozen fjord and wandered through the streets on the south side of the city. Although more modern, there were still some lovely areas, streets and buildings.
Sunday in Stockholm, what to do? How about the City Hall where the Nobel Dinner is held and to take the guided tour? The outside of the building gave no clues to what was inside and how mischievous the architect had been. After succumbing to the coffee shop seen yesterday it was onto the museum containing the wreck of the Vasa - with a slight detour due to navigational difficulties! What a wonderful ship, beautifully restored and unbelievably huge for its era. 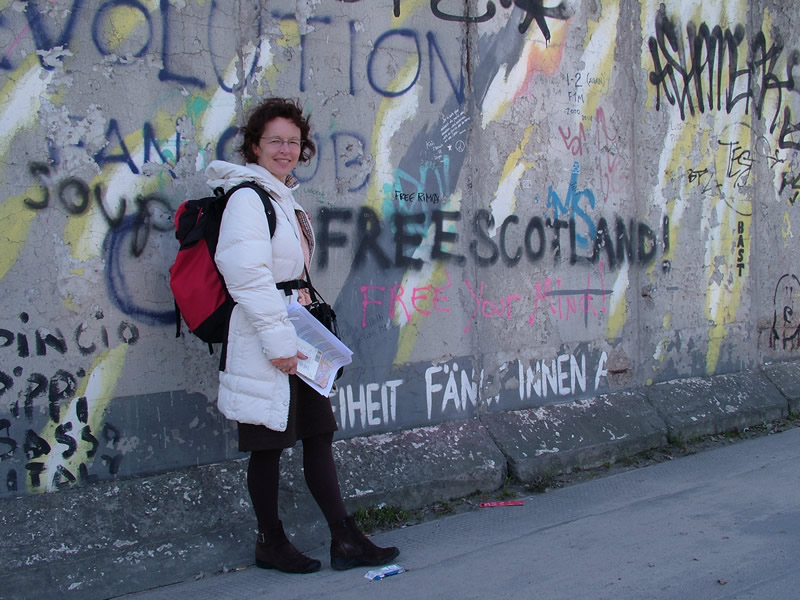 Until now my visits to Berlin have been mainly for business or for visiting friends but never as a tourist. So with mutti, Ruth, in tow we hit the town! We stayed in a lovely hotel in the Hackescher Markt area in what was East Berlin. The Hackescher Markt also provided the perfect venue for dining and the occasional refreshment!
On day 1 we visited Alexanderplatz and went up the television tower to get a panoramic view of the city, on to the Rathaus and its grand marble interior, followed by lunch in Reinhards close by the Spree. Nearby the slow demolition of the Palace of the Republic could be seen, what will replace it? A brief rest on bus 100 gave us a tour of the impressive buildings on the Unter den Linden, through the Tiergaten and on to Zoologischer Garten. A thought provoking visit to the wartime damaged Gedächtnis Church, followed by a brief visit to the KaDeWe shopping centre, swiftly onto the Brandenburg Gate and then an excellent tour of the Reichstag.
Day 2, we walked along the East Side Gallery viewing the artwork on a remnant of the Berlin Wall, onto Potsdamer Platz and ice cream in the Ice Cafe of Potsdamer Platz Arkaden. Some culture at the Neue National Gallery was followed by a visit to Checkpoint Charlie before heading for dinner at the beautiful Gendarmenmarkt.
Day 3, an excursion to the Peacock Island in the Wannsee followed by a visit to the Dutch Quarter and the Nikolai Church in Potsdam.
The following morning we managed to visit another section of the Berlin Wall near Bernauer Strasse before heading home. A wonderful city - I must visit again very soon!
Home